Palma is by far the largest town on the island, with around 500,000 inhabitants lived here more than half of all islanders. Palma is not only the seat of government of the Balearic Islands, the city also boasts the largest port and airport of the island group. 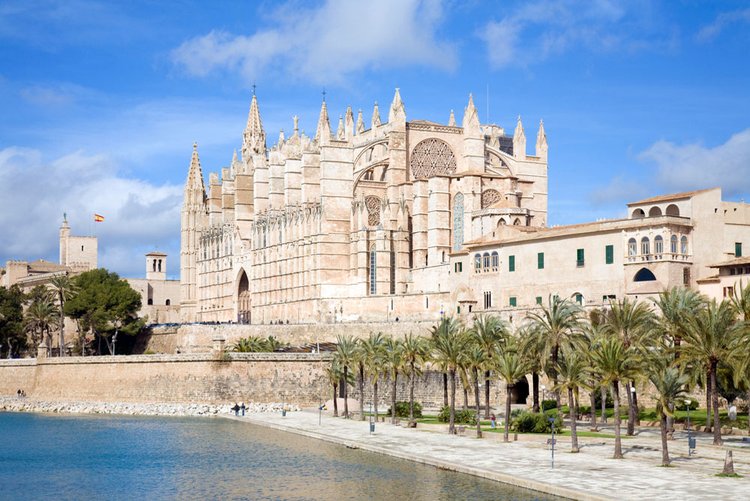 Palma de Mallorca Capital of the autonomous region. Concentra 50 per cent of the population of the island, with over 350,000 inhabitants. Set in a bay, 20 kilometers wide and 25 kilometers in length. The origin of the current settlement was a village Talayotic with strong ties to the sea. The name dates back to Roman times. The Arabs, in the tenth century, erected the walls of Medina Mayurka, and in 1229 it was conquered by King James I, which acquired a municipality covering the whole island, which was renamed Ciutat de Mallorca. The special distribution of town, crossed by a stream, leading to the Vila de Dalt Vila and d'Avall as urban population centers are located at each of its banks. At the beginning of the sixteenth century, plague, alien and rebellions frequent attacks by Berber pirates and Turks caused a reduction in business and the city entered a period of decline which lengthened until the end of the seventeenth century. In the eighteenth century the Order of New Plant Felipe V amending the rules governing the entire island, transforming the capital of Palma in the new province and it is in this century when Carlos III, with the liberalization of trade with the Indies, led to Mallorca to a growth in business and the port city. The French occupation of Algeria in the nineteenth century ended with the danger of attacks in North Mallorca, which favored the expansion of shipping lines and shippers, and therefore the economic growth of the city, which was enlarged with the birth demographically New centers of population. The emergence of the tourism phenomenon in the second half of the twentieth century changed the face of the city and across the island, becoming center of attraction for visitors and sociological exchange of cultures. Travelers arriving in Palma can contemplate a figure of all the elements that must be recognized so obliged, as the Castell de Bellver, sa Llonja, Almudaina, official seat of the Kings of Spain, during their summer stays, and the cathedral, Gothic. The City Council is a clear demonstration of the Baroque Majorcan and very close to him stands the church of Santa Eulalia, the first Christian Palme built in a remarkable example of Catalan Gothic. De Palma the latest highlights the modernist buildings of the Plaza Weyler, especially the Grand Hotel. Important Informationen and Phone Numbers: AYUNTAMIENTO: Plaça de Cort,1. 07001. Telefonos: 971 22 59 00. http: www.a-palma.es POLICIA LOCAL: Av. San Ferran, 42. 07013 Palma. Tel. 28 16 00.

This provides the environment

Palma de Mallorca restaurant in the harbour Can Barbara for rent